My mother Ursula Rosenfeld nee Simon known to all affectionately as Ully and her sister Hella grew up in Quakenbrück a small market town in northwest Germany.

They, like most Jewish families, were fully integrated into their community; they were Germans who happened to be Jews.

Their father Leopold had a forestry business and their mother Erna had trained as an opera singer and attended a conservatoire before her marriage.

In 1933 when Hitler came to power everything changed.

My mother said the first time she realised there was anything different about her was on her eighth birthday in February 1933. Her school friends had been invited to her home for a birthday party, everything was prepared, but none of her friends came. It was a terrible shock. Years later, she discovered that a teacher had forbidden the parents of the children to have any contact with her, with the threat that if the children did their parents would lose their jobs.

Life became increasingly difficult, their father’s work dried up and they were forced out of their home.

My mother had a strange dream two nights before Kristallnacht in November 1938 (the night of broken glass) that her father had been violently arrested.

The next evening at supper she remembered looking at him very closely and thinking that she should imprint his image on her mind. That was the last meal she remembered having with him.

The day after Kristallnacht he was arrested.

He had been taken to Buchenwald and had been beaten to death by the guards after he expressed his outrage at the treatment of the old people there.

The British government had offered to take 10,000 children however each child needed to have a sponsor. Their Uncle Albert who emigrated to South Africa after escaping Germany by being smuggled across the border in a coffin offered to pay the required £50 and to act as a guarantor. He and his wife had wanted to adopt them as they were childless but Ully and Hella never made the journey to South Africa.

Their mother came to the station in Hamburg to see them leave on the Kindertransport.

My mother said that “Saying goodbye to her was the most awful thing I remember, and I still can’t really cope with it”.

That was the last time they saw their mother.

After arriving in England they lodged with Mrs Shepherd a kindly woman who was probably grieving herself having lost both her husband and son in very sad circumstances.

My mother said that she probably thought she was going to be looking after one child but she ended up with two teenagers!

Hella left school at 16 to train as a nurse and when my mother left school she was apprenticed to a dressmaker. I think her experience sewing pearls onto dresses for debutantes in very poor working conditions contributed to the strong sense of social justice that she carried with her all her life.

One evening in Oxford the bus she was travelling on was involved in an accident. She was admitted to the hospital, the doctor was very concerned about this pale emaciated young girl. Through the hospital almoner, it was arranged for her to work in a children’s residential nursery from where she went on to train as a nurse.

She met Peter her future husband in Oxford in 1944. 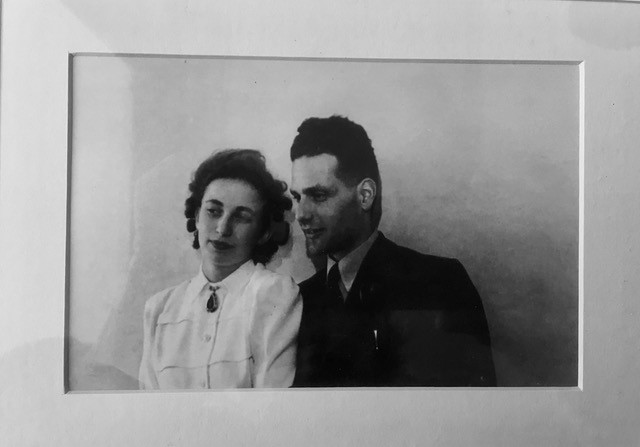 Peter was also German Jewish and had managed to leave Germany with his sister Hanna and father, Siegfried Rosenfeld, in 1939. They had received visas but his mother, Frau Dr Else Rosenfeld, was initially refused a visa and had to stay in Germany. She was hidden by friends until she eventually managed to escape into Switzerland.1

As soon as the war ended Ully and her sister went to the Red Cross Committee to search for news of their mother. They discovered that in 1939 she had gone to live with a cousin in Düsseldorf but was later deported. Eventually, they received a letter saying she had been killed in Minsk, Russia.

My parents married in 1946. They had 4 children; myself, my sister Gillian and my two brothers John and Paul.

Our father gained a scholarship to Ruskin College, Oxford, before working for the WEA and then as an education officer for a union, but perhaps his happiest working life took place after he retired when he volunteered for the Citizens Advice Bureau and worked for them as a self-trained lawyer.

My mother worked for many years in the NHS as a nurse and then a health visitor. After retirement, she worked as a magistrate in central Manchester and even volunteered in a charity shop throughout her 80s. She was deeply committed to helping those less fortunate than herself and to achieving a fair society.

Unlike my father’s family history which we children knew something of, we knew hardly anything of our mother’s history. It was so painful that what had happened before and during the war to her and her family was barely mentioned.

In the mid-1990s, my daughter, Kirsten, saw the film, ‘Schindler’s List’, at the end of the credits there was a reference to the USC Shoah Foundation wanting testimonials from as many people as possible who had survived the holocaust. Unbeknown to my mother, Kirsten wrote to them telling them that her grandmother was a survivor. They contacted us and my mother decided that, if Kirsten felt so strongly about it, she would tell her story.2

Her story was one of twelve picked to feature in the documentary, ‘Into the Arms of Strangers’.3

Mum said that she found talking about what happened for the first time cathartic. She said, “In fact, it released a lot of emotion in me and afterwards I felt so much easier because it had been on my mind”.

Back to Kindertransport Memories